“Wall of Shame” would be more appropriate title for this post, but let’s keep it professional.

For example, if your node performance tanks for days, you lower your commission to retain nominators if they don’t leave you anyway, right?

Well, yes, except that this validator hasn’t done it, and why would he when his uptime is okay and so he gets the regular 200,000 xx nomination helping from Team Multiplier. So 18% it is!

How about this one?

Nope, still 18%. Maybe he lost the multiplier in era 143, but other than that he’s very much in the game, charging the maximum commission possible.

Now this one has barely any excuse to still validate rather than nominate.

Nope. There’s no reason to charge less than the maximum. 18% - because they can!

This one has invested in doubling the performance and earnings, from 50 to 100 xx/day, so it’s only right to claim a fair share of earnings for the hard work and investments made in recent weeks.

It’s enough to see one or two such cases - and there are many - to realize that most of the worst Team Multiplier-backed nodes have no need or reason to compete.

On the other hand, the best TM-backed nodes can’t charge more than worst nodes, which isn’t right.

Non-TM-backed nodes need not apply, because 90% of them stands no chance to get elected against nodes from these screenshots.

And finally, the ease with which the worst nodes can constantly charge the maximum commission with utmost impunity opens up a way to game the system and yet not violate any spelled-out Team Multiplier rules.

NOTE: none of these charts show validator nodes from Ukraine or Russia.

The fault is the validator because it’s their job to provide average performance at any time and solve these issues when happen. I buy all spare parts for can change any hardware piece at any time if something happen for not stay too many time offline or have performance issue but not everyone do that. The last step if nothing work it’s accepting to turn off your node until you can solve your issue and come back to average network performance.

What can be done by the team is to let open a vote and force nominators removal or remove temporary TM for bad performing node after 10/15/20/30/… days where the reward was lower than network average.
The team not want that but I think the current war show us that’s important to the network to keep best performance as possible at any time whatever happen. Timeout go from 2500/3000 in January to 10500/11000 for April and realtime go from 350 to 500 in the same period. The network continue to work but the impact seem way too high.
Bad nodes should be ejected and replaced by better performing node in waiting list for have at any time the best network as possible but probably increase the number of nodes too by open canary network again but seem very late now

They need to wait 6 months for received their first reward so push that to the end of year for have better nodes in another countries. I not understand the team on this point to stop recruitment we need most validators as possible.

I hope something will be done for when a war happen or anything the impact is 5-20% maximum and not more on timeout/realtime. So for timeout give a range from 2650 to 3600 and realtime from 370 to 420 because bad performing node are replaced by better one.

The fault is the validator because it’s their job to provide average performance at any time and solve these issues when happen.

My point is they don’t have to, all of these guys get their TM as long as they meet the extremely modest rules (and even if they don’t, they dropped for a while and come back and regain the full amount of the multiplier.

What can be done by the team is to let open a vote and force nominators removal or remove temporary TM for bad performing node after 10/15/20/30/… days where the reward was lower than network average.

Last time when this was even discussed, my suggestion was to deduct a percentage of the multiplier amount for reasons of poor performance (i.e. maybe not as soon as they’re below average, but if they hit 20% below network average in an era, deduct 0.5% from their Team Multiplier). But I wouldn’t be against other approaches over the current situation.

Bad validators consistently get rewarded more compared to best validators who make less precisely because they have better hardware, spare parts and proper server and service management - all these good things they do right means they have higher costs, but they get the same % earned.

Dozens of TM-backed nodes have no business being validators, but only a handful of them charge less than the maximum commission allowed. 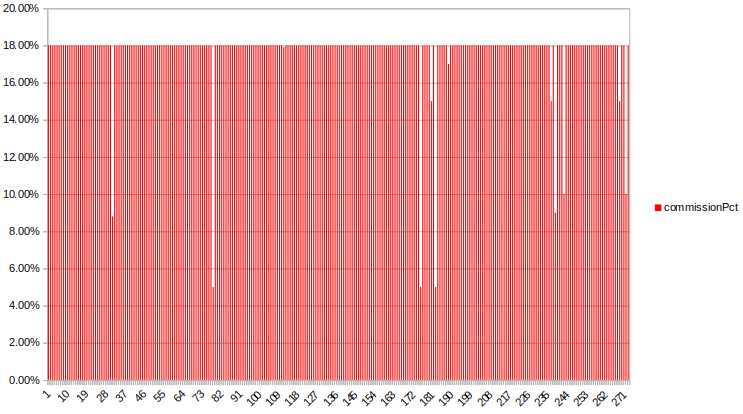 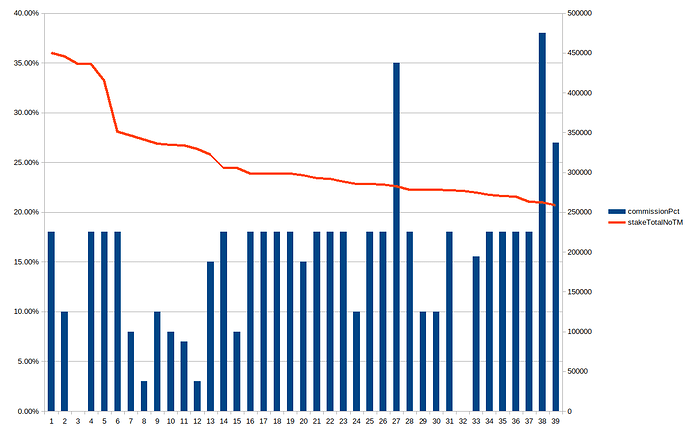 Numbers 3 and 32 probably got unelected and shouldn’t be in the chart, but others - especially the ones with relatively smaller stakes (numbers > 32 on x-axis) charge at least 18% and in some cases a lot more.

Why is that? Shouldn’t the nodes with more funds (1-15 on x-axis) charge more?

Validators 38, 39 have enough funds to self-elect (and in fact they use other addresses to nominate their nodes just enough to get elected) and don’t need/want any other nominators. They don’t have to compete.

The bigger staked nodes are not micro-managed by single entity, which tells us they compete.

In conclusion, TM-backed nodes get help so they tend to not compete, while independent nodes do.