Why the 100Mbit Bandwidth Requirement?

Last year, we published the “Elixxir BetaNet Nodes Guide” which stated nodes would require a “500 Megabit+” internet connection, but really leaning towards 1Gbit. Back when we published those specifications, there was concern because those numbers are not achievable for many, so the team worked to find a solution .

Ben recently published the revised node requirements. Today I’d like you to see how and why we require 100Mbit internet connection.

First the how. In the NodeLab I used a team of 5 nodes to complete 11 rounds. A round consists of the precomutation and the real time phases to deliver 10,000 messages, with the precomputation taking the bulk of the time. Each set of 11 rounds was conducted using 1Gbit, 500Mbit, 250Mbit, 100Mbit, 50Mbit and 10Mbit network speeds. The network in the NodeLab is 1Gbit LAN so I used Linux Traffic Control and Hierarchical Token Bucket to limit the bandwidth of the ports which the nodes communicate over.

The results can be seen in the following graph. 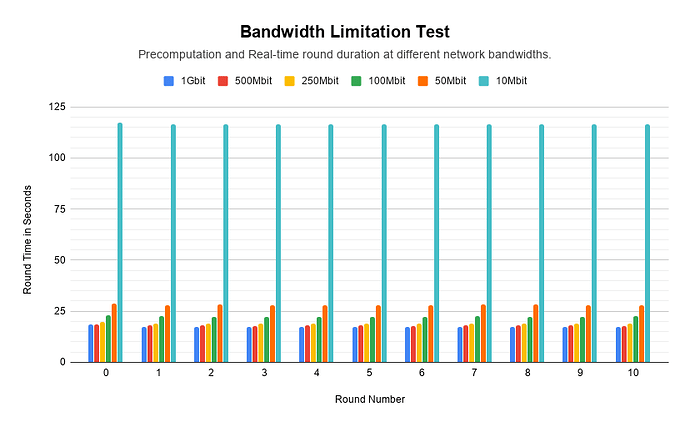 Like most mix networks, the Elixxir protocol operates sequentially. A batch of messages must be processed by each node in a team order. By moving to streaming comms, a node can start on a batch before the entirety has been received. This means that as long as the transmission of data from one node to the other is faster than the cryptography, the time it takes to transfer the data does not factor at all into how long the round takes.

From our testing we discovered that for a 10k batch with 4096 bit messages, that limit is roughly 100 megabits.

xx network was able to solve the problem of slow secure messaging by not doing everything in real time and by moving most of the cryptographic work to precomputation. Unfortunately there is nothing we can do about how quickly it actually takes to send data across the internet.

I hope this helps everyone understand how we came to the decision and why we have the requirements we do.

Thanks so much for keeping us updated! I just wanted to throw my two cents in that, at some point, we do hit a point where it’s OK to leave some would-be node operators behind due to slow internet or other hardware considerations. I think I’m not alone in saying that while we operators genuinely want to include as many participants as possible, we also trust the team to define minimum specifications that incentivize a strong, performant network. I could see some folks getting heated about the topic, so I figured I’d throw out there that “we in the silent majority” understand the balance you’re looking to strike and respect how you’re going about it.

Thanks for the nice explanation and statistics !

p.s. Really looking forward to what you come up with for the 1U server. Let me know if I can be of assistance.

Can you tell me what the maximum total data transfer requirements are per month for the BetaNet?

This could be the difference for the viability of cloud based instances. If it turns out to be 100 Mbps * 30 * 86400, it’s hard to imagine how it could be competitive vs home-based setups.

I haven’t carefully calculated, but based on a quick look 10 MB/s egress costs around $2,000 per month.

Cloud based egress like AWS or GCP is definitely a no-go. But that is not what I’m talking about here.

Data plans often contain a cap per month. For example, one of my available home plans had a monthly cap of 5TB and they would have penalty charges for going over. Some data center colocation plans also have a cap (in TB), particularly if a fixed speed like 100Mbps or 1Gbps is requested. Data center bandwidth plans are much cheaper than cloud egress charges. The most common plan seems to be a 5-100Mbps base rate that can be exceeded without penalty 5% of the time (usually up to 1 or 10 Gbps) called a “95% burstable” plan. For 95% burstable plans I have not seen a cap but they get too expensive at high base rates vs fixed rate capped plans. At least one data center I talked to only offered the 95% burstable plan and I think it is the common/preferred/cheapest plan by the market. I do not have an understanding of how the xx network data usage profile would work with a 95% burstable plan (i.e. what base rate would be required?)

Fair enough. I was looking for it from a cloud vs. home angle, but no doubt many folks have the concern you have. Let’s hope that the real-time part of each round involves comparatively little time relative to processing time.

@Selo Some people were looking into using co-location to run their servers from data centers.

@Keith may i ask to do the same test again and add simulated latency on each node? In your local network you have sub 1ms latency and latency has a huge impact…

Would love to see the results in this “more” realistic scenario.

Would love to see the results in this “more” realistic scenario.

The only result would be determining the average latency between nodes and again that’s not realistic because a round could timeout even if two nodes in Asia have very low latency and one node in North America slows the whole thing down.

This causes the added delay to be 100ms ± 10ms with the next random element depending 25%
on the previous one.

I’ve been looking at colocation also. I’m looking at 100Mps with 10TB a month. Would that be sufficient?

I’m looking at 100Mps with 10TB a month. Would that be sufficient?

Ok cool! Going to start with a home setup if I get chosen. Then as things progress I might deploy a dedicated server in a data center.